Duluth, GA – Millions of voters of faith across the country cast their ballots last November for then-candidate Trump, largely based upon his pledge to nominate a Supreme Court Justice in the mold of the late Justice Antonin Scalia, and today is a major victory for people of faith across the country as President Trump delivered with the confirmation of Judge Neil Gorsuch to serve as Associate Justice on the U.S. Supreme Court. 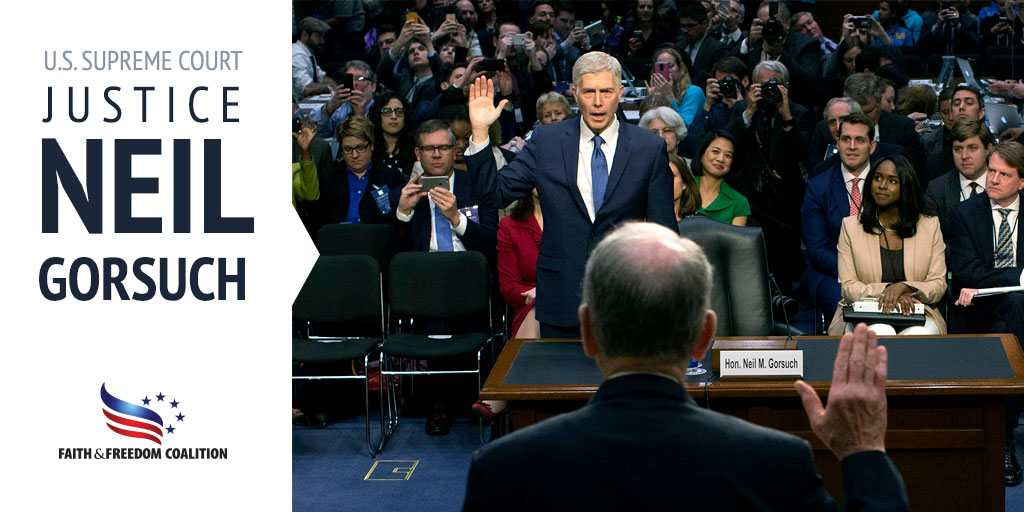 The U.S. Senate voted 54-45 for confirmation of Judge Gorsuch one day after Senate Majority Leader Mitch McConnell and his colleagues thwarted the liberal Democrats attempt to usurp the will of the people through a partisan driven filibuster of the nomination of Judge Gorsuch by voting to end debate and allow his nomination to come to the floor for today’s historic vote. “We are grateful and pleased that Justice Gorsuch will now sit on the U.S. Supreme Court,” said Chairman Ralph Reed. “President Trump deserves enormous credit for choosing an outstanding nominee, and Republicans in the U.S. Senate are also to be commended for valiantly fighting for Justice Gorsuch’s nomination.”  In the weeks leading up to the vote, Faith & Freedom Coalition launched a pro-Gorsuch campaign that included over one million emails, one million pieces of direct mail, over 500,000 postcards, and 500,000 phone calls into targeted states with sitting Democratic Senators that were won by President Trump last year, to rally evangelical and conservative Catholic voters to encourage these Senators to end the filibuster and to vote in favor of Judge Gorsuch. “Confirmation of Justice Gorsuch was the number one legislative priority of Faith & Freedom Coalition and today we celebrate this major victory with people of faith across the nation,” said Executive Director Tim Head. “The Constitution and rule of law won this day and now one of the most eminently qualified nominees to the Supreme Court our nation has ever seen will serve on the highest court in the land.” Faith & Freedom Coalition, in addition to the digital, email and phone campaign, also issued a “key vote” alert to millions of faith based voters across the country, and will include the vote to end debate as part of the 115th Congressional Scorecard. Fifty-two Republicans joined Democratic Senators Manchin, Heitkamp and Donnelly to vote yes on his nomination.